I'm such a slacker

I promised photos. And I fully intended to take some. But, in the best tradition of things, other things took over.

It started when my daughter rescued a couple of kittens. We decided to keep one and took the other to the SPCA. Then we decided we should get a second kitten after all, as a playmate for the first, since our existing cats are 8 and 14 and unlikely to ever want to be friendly toward a new kitten. This will sound awful, but we didn't want the brother we took to the SPCA. I think he will make a lovely kitten for a single-cat household, but while he had his brother to play with he showed no inclination to bond with us at all.

We saw some half-Burmese advertised "Free to good home". Wow. Our 8 year old cat is half-Burmese and was free to a good home and she is the most amazing cat I have ever known. The circular was a week old, so I didn't for one minute expect there to be any left, but I called the number and discovered they still had 3 females left - two silver tabbies and a black. We went to have a look and were able to watch them in their home environment, see the beautiful Burmese mother, and interact with them, and brought home the little black one - mainly because she reminded us so much of our beautiful Tasha at that age.

She wanted nothing to do with the little male kitten for a couple of days, but now they play all day when they are not doing the kitten thing and sleeping. We named the little boy Diego (he is the biggest and close to 4 months old) and the little girl Delphi (they told us she is 10 weeks old, but I suspect she's probably closer to 6-8 weeks, hmmmm!). I haven't been able to get a good shot of them playing because they are like mini-tornadoes and they come out like little black blurs.
﻿﻿
﻿﻿ 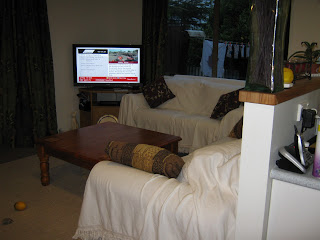 Don't you just love the washing through the window? Sorry about that, but it's been raining here for days now, and at least it's out the way.
This afternoon Tasha came in bleeding profusely and we discovered she has a nasty cut behind her pad on her right rear paw. We took her to the vet and she was for surgery to get it cleaned out and stitched. Unfortunately, she has to stay the night there since it happened not long before they closed. We will pick her up in the morning.
Never a dull moment. Seriously.﻿

Added 26 May: we bumped into the husband of the couple we got our little Delphi from. Sadly 3 weeks after we got her, her mother was killed on the road. She was still very young, less than a year old.
Posted by Lynne at 1:25 AM