A few weeks ago I came across a recipe in a magazine. Unfortunately the magazine was in the waiting area where I was treating myself to a gourmet vegetarian pizza. Undeterred, and probably a little brashly, I asked if I could rip the page out. They seemed remarkably uncaring whether I did or not. So... 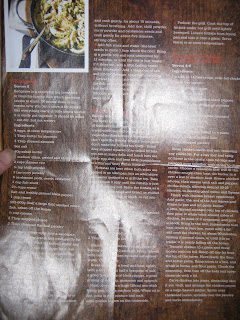 White lettering on a brown woodgrain pattern. If I'd realised how hard it would be to find my place quickly while in the process of cooking, I would have written it out by hand first. Live and learn.
This turned out to be super-tasty and not too fishy, this being my biggest worry as I only like very mild flavoured fish, such as gurnard.
Cardamom seeds turned out to be an unexpected pleasure.
I've been having difficulty sourcing cardomom pods (which are called for in a lot of the recipes I've been using). I've been using the ground cardamom, but yesterday  finally managed to find some pods. I nearly didn't buy them, thinking that the flavour would be the same as the ground version. How wrong could I be? I followed the instructions to break open the pods and remove the whole seeds.
As I was eating the kedgeree one of these tiny seeds would get crushed and my mouth would fill with a beautiful and flavoursome sweetness. I think this is a big breakthrough somehow.
Now I understand.
I used sultanas rather than raisins, but only because I don't like raisins or currants.
I used half a cup of chopped onion and half a cup of chopped sweet red bell pepper, rather than a whole  chopped onion, (but this was only because I happened to have these two half cups sitting in the fridge surplus to the failed baked layered tortilla stack I made last night. The top burnt, there was too much chilli and yes I did follow the recipe, and it totally fell apart when I tried to cut it into slices. Under the top burnt tortilla the unsightly mess it fell into on the plate tasted fine but it is, nonetheless, a recipe I put into the paper recycling bin).
I also used vegetable stock rather than fish stock because I didn't want it to be too fishy.
I also halved the quantities since there is only me, and I had a very hearty meal (and went back and had a little more), and there is enough for me to take to work for the next two days to reheat.
Those were the only changes I made.
This is the recipe with the original ingredients and quantities.
Kedgeree
4 eggs, hardboiled and quartered
1 medium onion, chopped
2 cups jasmine rice
1/4 tsp chilli powder
3 tsp curry powder
6 cardamom pods, seeds extracted
1 cup fish stock
2 1/2 cups water
salt and freshly ground pepper
500-600g smoked white fish, taken off the bones
(I used a 300g can smoked fish fillets)
1/2 cup raisins
2 Tbsp snipped chives
3 Tbsp chopped flat leaf parsley
1. Sautee onion in butter for about 10 minutes without browning.
2. Add rice and spices and cook gently for about 5 minutes.
3. Add stock and water. Bring to a gentle boil and cook uncovered for approx 12 minutes, or until rice is just tender. If it dries out add a little boiling water from the kettle (I just added a bit of leftover stock).
4. Add a teaspoon of salt and a pinch of pepper, then taste and add more if required (must admit I didn't add that much salt).
5. Lower heat, then stir in fish, raisins and herbs. Half bury eggs in the rice. Heat through. Serve immediately. 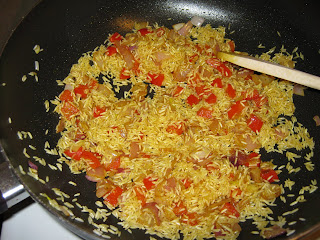 After adding the spices.
Posted by Lynne at 1:02 AM